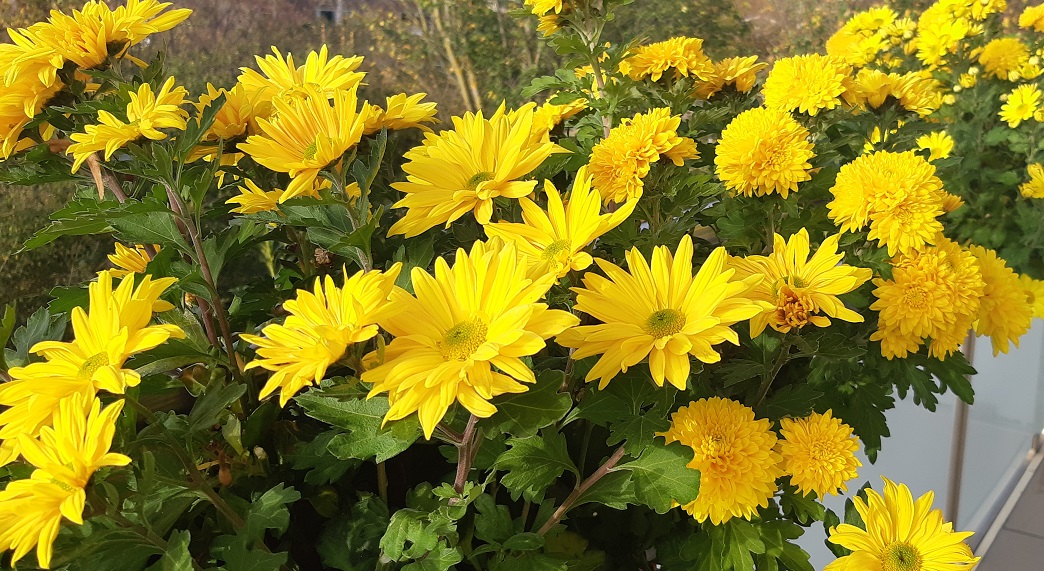 I have acquired these beautiful flowers mid-summer and by the end of the season have almost given up on them. They were struggling with the summer heat and sunshine. I had to move them to a shady spot in the morning, then move them back in the evening and water them constantly just to keep them alive ... then autumn came and the modest chrysanthemums literally "exploded" on the balcony. They cope really well with low temperatures (so far positive though), cloudy weather and high humidity.
I think the Latin designations is "Chrysanthemum indicum", but cannot really tell. Symbolically, in some European countries, they are associated with death, while in Asia with adversity. I do not care - I like them. So beautiful!
Historically chrysanthemums (or chrysanthema) trace back to 5th century China and a bit later to Japan, where they represent the nobles and particularly the Imperial family. 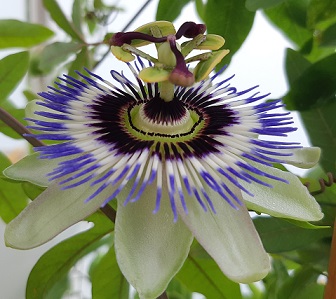 A couple of months ago I, the two-left-handed person when it comes to gardening, fell in love with this beautiful plant. I saw it on the street, just hanging from a high fence and ... I simply could not believe my eyes. It looked as if straight from the Avatar movie. Also - non-native to the place where I live, so it was quite the sight. The overall position and size of the plant suggested it was sitting outside the whole year, surviving the negative temperatures, which is also amazing, considering the fact it loves the sun and comes from South America. The leaves are a bit strange, but nothing spectacular, compared to the flowers, which look absolute alien with its antnenae-shape and incredible colors. Its flowers are white, sometimes pink-flushed, with a ring of blue, white and purple filaments. They are mostly closed and open just for a day. Then they fade and die-out, but one stem can produce numerous flowers, so every day you will be surprised to see another one, peeking from the ever-green foliage. Here you can see the only fruit it made (so cool!).

After some digging, I found some being sold at local gardening shop and got one. First it was outside, twining on the balcony's rails, but I feared that it will settle in and during the winter I will not be able to remove it safely, thus I put it on a plant rack inside (after one hour unwinding). Reading about it proved to be useful - it requires a lot of sunshine and water, and should be kept away from other plants, as it gets invasive. The plant should not be mistaken with Passiflora edulis (Maracuya), which is the edible version (though some say Caerulea is also edible).